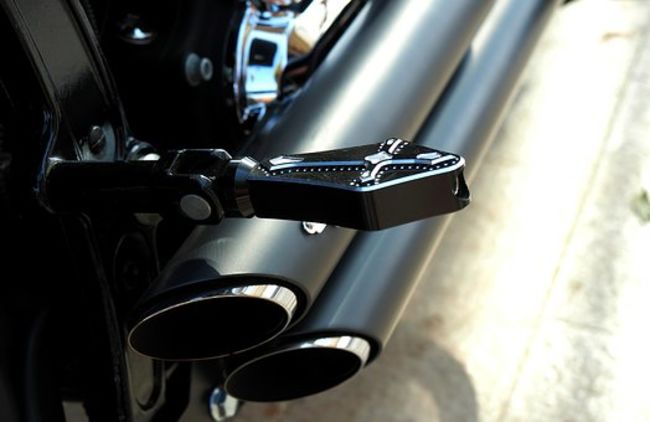 Harley Davidson cruisers are incredibly distinctive motorcycles in two main areas: looks and sound. From the factory they already sound as good as they look, but part of the fun of owning a Harley is modifying it. After all, if you can unleash a few more ponies at the rear wheel, and make that beautiful V-twin roar even deeper and raspier, why wouldn’t you?

By swapping your stock pipes out for a high quality performance exhaust, you can liberate a some extra horsepower from your motor, get it running and combusting fuel more efficiently, plus you’ll get a very distinctive sound. For most motorcyclists, Harley riders included, a performance exhaust is one of the first and most desirable mods you can make to your ride.

Maybe you already have a good set of aftermarket mufflers, or maybe you like your stock mufflers but need to replace your stock headers on your Street Glide or Ultra Classic. Maybe you just want to dip your toes into the world of performance mods for your Hog without jumping into the deep end.

This is a great exhaust for low end torque.

If any of these are the case for you, Cobra’s True Dual Head Pipes might be what you’re looking for. They have a quality chrome finish, so they look great. If you’re using them with aftermarket mufflers, they sound brilliant. Also, the price, at a shade over $350, isn’t too bad at all either. You can also expect to see some small performance gains when using these header pipes.

Vance & Hines are one of the biggest names in performance pipes, and their Power Duals will provide excellent performance gains and better sound for your Electra Glide.

Vance & Hines are one of the biggest names around when it comes to motorcycle performance exhausts, and they’re known for producing high quality pipes that sound great and provide noticeable performance gains. Their Power Duals for 2009-16 touring models are no exception; these pipes are manufactured to extremely high standards of quality, and will provide a very noticeable increase in torque and horsepower over your stock pipes. The downside to all this quality though, is the price; these pipes don’t come cheap. Also, these are header pipes only if you want Vance & Hines mufflers to go with them, you’ll have to buy those separately. Even so, though, these pipes would be a worthwhile investment for any serious rider.

Vance and Hines are well known for their exhaust systems. The mini grenades are truly a masterpiece fit for any Harley rider.

Just as one might expect a loud bang with a deafening blow from a typical grenade. You can expect the same from the mini grenade exhaust system. They have been designed with a loud deep roar in mind. Complete with the signature look of the staggered three step design, this exhaust system encompasses CNC machined end caps.

If you want big bang (quite literally) for your buck, the short shots will add some serious style (and thunder) to your Harley Sportster.

Few things say “I mean business” on your Harley Sportster than drag pipes. As the name suggests, drag pipes were originally used on drag racing motorcycles, where noise levels were of no concern, to save weight and release horsepower. These pipes from Vance & Hines bolt right onto your Harley Sportster, but you’ll need to adjust your air/fuel mixture to avoid running lean.

Being open pipes, they’re very, VERY loud, so they may or may not be legal, depending on where you live. You’ll definitely want to wear earplugs while riding with these pipes. You probably won’t find a cheaper set of pipes anywhere, and while the quality is decent enough, it’s not on par with the more expensive offerings in this list.

The Road Rage 3 2-into-1 stainless steel exhaust system from Bassani Xhausts provides both sound and performance gains while looking stylish.

If you’re looking to get a little more performance and an improvement in sound over stock for your Harley Davidson Dyna, Bassani Xhausts have designed a high quality stainless steel two-into-one exhaust that may well be ideal for your needs. You’ll get some modest torque and horsepower gains out of this pipe, but they’re gains nonetheless.

You’ll definitely notice an improvement in sound over your stock pipes, particularly when you really open the throttle up, although at idle it’s a perfectly socially acceptable burble, and not obnoxiously loud by any means. As with any performance exhaust system, you’ll need to adjust your air/fuel mixture (or have it done by a professional) to ensure your system is working optimally with the new pipes. These are great quality pipes, but they aren’t too cheap.

Why Do I Need A Performance Exhaust?

In short, you don’t really “need” a performance exhaust system any more than you “need” any other motorcycle modification. Harley Davidson motorcycles, like pretty much any other bikes, are set up to perform optimally at the factory. However, there are government noise regulations and emissions limits that manufacturers have to legally comply with, which means that often motorcycle manufacturers, like Harley Davidson, have to limit both the sound and the performance potential of their bikes at the factory.

Of course, most motorcycle enthusiasts want to unleash every ounce of potential of which their beloved rides are capable. If you’re a racer and you need to wring every last drop of horsepower from your motor, then you’re going to need a lot more mods than just a performance exhaust, but for most enthusiasts, a performance exhaust system will give them decent enough gains in power over stock, plus they almost always pack a much heftier punch in terms of sound.

What’s the Difference Between A Full Exhaust System and A Slip-On Muffler?

If you really want your bike to go a lot better, and you want to see improvements in torque, horsepower and, sometimes, fuel efficiency, you’re going to have to get a full exhaust system. They do cost more, and require more effort in terms of installation – and in most cases you’ll need to adjust your air/fuel mixture by rejetting (if your cruiser is a carburetor model) or electronically adjusting the air/fuel mixture (if your bike is fuel injected) to avoid damaging your motor by running lean. However, you’re guaranteed to see (as well as hear and feel) results by installing a performance exhaust system.

How Loud is A Harley Davidson in Db?

“How loud are Harley Davidson motorcycles allowed to be?” should be the question you’re asking. Of course, figures will vary depending on which Harley model you’re talking about, but with an unrestricted exhaust system with the baffles removed, can go as high as 110 decibels (db). In many states you can be prosecuted for having a bike that’s louder than 90, 92 or 94db, depending on where you are. Stock Harleys are not, by government regulation and noise pollution laws, supposed to be higher than around 80db. What do these figures actually mean, though?

There’s a handy list of everyday sounds with decibel figures here, but if you don’t want to read the whole thing, 80db is the dial tone of a telephone (a regular landline phone) ringing next you. 90 is the same as the sound of a train whistle from five hundred feet away. Anything higher than 90db can cause permanent hearing damage if exposure to the sound is sustained and frequent. That’s why it’s a good idea to wear earplugs when you ride, especially if you’ve got loud pipes.

Why Do Harleys Sound Different?

There are a number of things that are distinctive about Harley Davidson motorcycles, but one area in which they really stand out is their sound. Few other motorcycles produce such a distinctively thunderous rumble from their exhausts. Why do Harleys have this sound, though? After all, Harley Davidson isn’t the only motorcycle manufacturer who produce large capacity V-twin motors.

The answer to this question lies in the layout of a Harley motor. There’s a fairly in-depth explanation of where the Harley sound comes from here, but basically it’s because in a Harley motor, compared to other twin cylinder motors, there’s a single pin connecting both pistons’ connecting rods to the crankshaft, which causes firing at uneven intervals (rather than the more regularly spaced intervals in other twin cylinder engines). This uneven firing (which is exclusive to Harleys and protected by patent) is what gives Harley motors that very unique sound.

Performance Exhausts – A Quick Path to More Torque, Power and A Better Sound

If you love your stock Harley but wish you could extract just a little more performance from its stock motor, as well as get a more intense and distinctive sound, a performance exhaust system will help you tick both of those boxes with ease. And while they’re more expensive and require more effort to fit than a slip-on muffler, you’re pretty much guaranteed to get performance gains, which won’t happen with only a slip-on. If you want your bike’s motor to perform as well as it sounds, then a performance exhaust system for your Harley Davidson is just what you need.