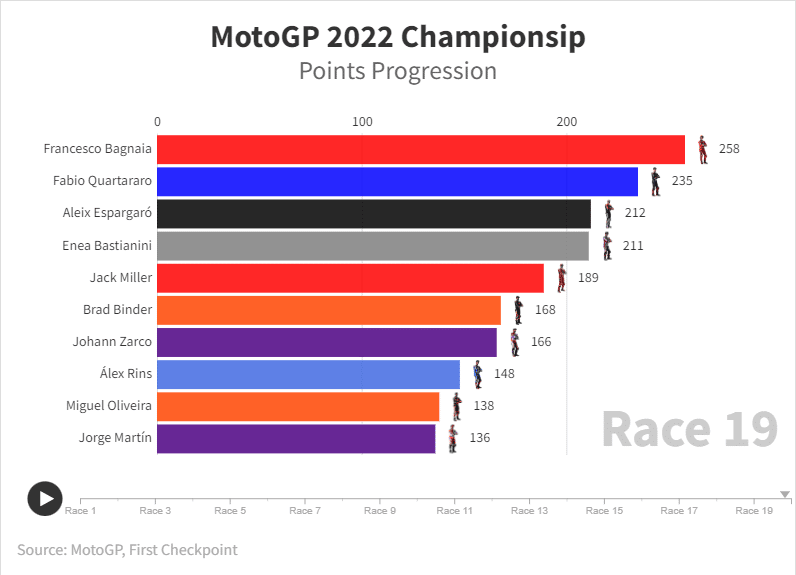 The below chart shows the cumulative points for each rider through the 2022 MotoGP championship.

If you would like to use any of the charts on this page for your website – I have provided the embed code below. Please credit firstcheckpoint.com

How We Got To This Point

Defending champion Fabio Quartararo took his first win of the season in Race 5 at Portugal, taking lead in the riders’ standings.

In Japan, Marc Márquez took pole position in a wet qualifying session, marking his first pole position start in 1071 days since the previous Japanese Grand Prix in 2019. During the race at Japan, the championship leaders struggled. Francesco Bagnaia crashed out in a final lap attempt to pass Fabio Quartararo for 8th position. After a necessary bike swap following the sighting lap, Aleix Espargaro started the race from pit lane, managing to finish the race in 16th place. On the third lap, Jack Miller took the lead from 7th on the grid, finishing ahead of Brad Binder and Jorge Martín.

At the Thai round, rookie Marco Bezzecchi took his first ever pole position setting a new MotoGP record for 10 unique pole starters in a season. For the second time this season, Miguel Oliviera raced his KTM to victory in the wet. Quartararo suffered a pointless race, finishing in 17th place allowing Bagnaia to cut Quartararo’s lead to just 2 points with a podium finish.

At this point, only three races remain. During a fist-clenching race at Phillip Island, Australia, Álex Rins crossed the line first in a group of seven riders separated by less than 0.9 seconds. This lead Suzuki to their first victory of their final season. Fabio Quartararo held the lead in the championship standings until crashing out at Phillip Island. Francesco Bagnaia finished on the third step of the podium and claimed the lead in the championship standings.

At the Malaysian race, Bagnaia took the win ahead of Bastianini and Quartararo, meaning the title decision would go down to the final round in Valencia.

Points are awarded to the top fifteen finishers. A rider must finish the race to earn points.

Bagnaia will be the 2022 World Champion in Valencia if:

Quartararo will be the 2022 World Champion in Valencia if:

The team standings are based on results obtained by regular and substitute riders. Wild-card entries are ineligible.

Each constructor receives the same number of points as their best-placed rider in each race.

If you would like to use the above graph on your website, copy the code below. Please credit firstcheckpoint.com