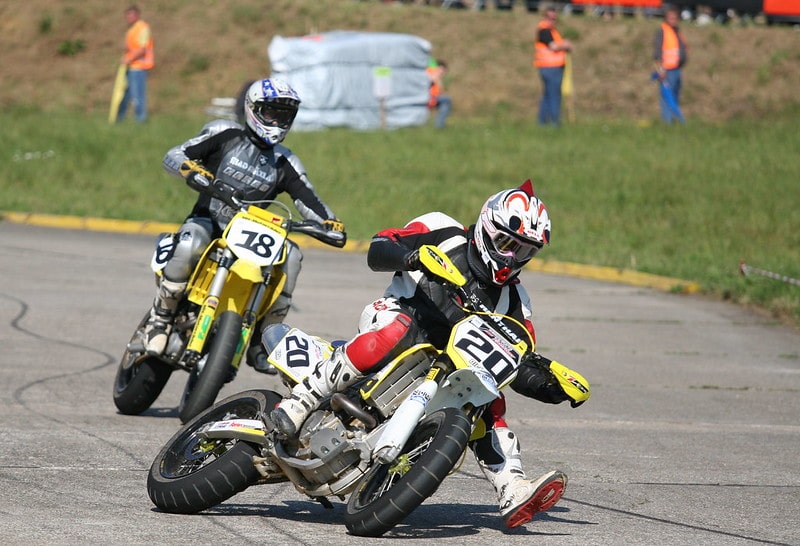 I’m sure we’ve all heard the saying – you can’t have the best of both worlds. Whoever came up with that has obviously never heard of supermoto. Supermoto is a unique motorcycle racing style where riders race around a track which is built with three different surfaces. These race track surfaces include the typical hard-packed dirt of flat track racing, rough dirt with jumps, ruts, and obstacles of motocross racing, and paved tarmac of street racing.

One of the challenges with supermoto racing is finding the right riding gear. Since the track is multipurpose and multi-surface, you’ll need to be prepared to handle all situations. From rough dirt corners, ruts, jumps, and various obstacles, to high-speed leg out cornering around the tarmac sections.

The Best Supermoto Boots – Best Of Both Worlds

The best boots for supermoto are the pair of boots that offer enough mobility, flexibility, feel, and protection so that you’re still able to find both your gears/brakes as well as the floor while entering corners and racing other parts of the track.

Hands down the best boot on the market is the Sidi Crossfire 3 SRS – at least in my opinion and by popular choice in the Supermoto racing championships around the world.

The Sidi Crossfire 3 SRS is the ultimate multipurpose boot. It’s primary use is as a motocross boot while it’s twin brother, the Crossfire 3 TA is tailored more towards enduro and trail riding. If you can afford it, this is the best premium boot for supermoto. It’s jam-packed full of high tech features. One of the main reasons the range of Sidi dirt bike boots stands out is thanks to the Sole Replacement System (SRS). This is basically a bolt-on sole designed so that riders are able to swap and replace worn out or damaged soles on the fly.

The dual flex system prevents hyperextension of the ankle and also allows for an incredible amount of customization from a fit adjustment perspective, so no matter what size or shape your leg is, these will fit great. The same can be said if you ride with or without knee braces - they will fit. The Adjustable Calf System further helps to get a great fitting boot while also protecting you from the exhaust with the built-in heat shields.

A Non-Bootie Design makes the boot much slimmer and less bulky. This really helps when looking for the brakes and gears. Exactly what many supermoto riders complain about in their boots. The toe cap is covered in a hard plastic that protects the underlying materials from hard knocks and abrasion against your shifters, levers, footpegs, as well as the surface of the race track should you dab your toes in the floor. The tip of the toe on the is covered with plastic to protect the base material and seams against abrasion from brush, etc. Plastic shift and brake lever guards on the top of each foot area.

Ankle pivot allows for a large range of motion in the ankle making the boots comfortable, while also adding in the preventative hyperextension technology.  The inner sole is extremely comfortable since it sits deeper into the boot with more of a cupped design providing extra support to your foot. The inner sole boat features a more cupped and thicker design so the rider’s footrests deeper into the sole system and also helps to protect against rotational forces.

The outer sole sports an anti-skid rubber covering the entire arch area of the foot. This is also completely replaceable with a few simple tools. The heel section is super rigid and impact resistant which adds a lot of protection to the heels of your feet.

The reality is that unless you’re a pro racer, have the cash to spend, or simply want the best of the best, the Sidi SRS 3 may be out of your budget. But that’s perfectly OK, because the SRS 2 will be the perfect option. I personally own the Sidi Crossfire 2 TA boots which I absolutely love for my enduro riding so I have no doubt that the Crossfire 2 SRS boots would be perfect for motocross and supermoto.

Of course, there are a few bells and whistles which the SRS 2 is missing in comparison to the SRS 3, but let’s not focus on what’s missing because these boots seriously don’t have much wrong with them. They offer all the ankle support and protection against rotational forces you could ever want.

Way more protection than any typical street boot would give you - particularly around the toe, heel, and shin area. The toes have the same protective cover just like the SRS 3 boots. They also have a highly customizable dual flex system and adjustable calf system.

The best part, as with the SRS 3, the sole is completely replaceable so putting your leg down around those tight hairpin corners is exactly what these boots are for.

When it comes to finding the best supermoto boots, the SRS 2 has an advantage over the SRS 3 in the form of replaceable supermoto toe sliders. No supermoto boot roundup would be complete without Gaerne. The SG12 boots are Gaernes’ most prized motocross boots to ever walk/ride the planet. These boots are the direct competitor to the Sidi SRS 3 and the Alpinestars Tech 10’s, and they certainly are a worthy opponent. The SG12s are worn by pro motocross riders like Malcolm Stewart and Zach Osborne. In the world of Supermoto, Diego Monticelli won the 2020 world Supermoto European Championship wearing a pair of SG12’s identical to these ones.

One of the differences between the SG12’s and the other boots on this list is the steel toe cap. It’s been redesigned and reinforced to give even more protection and withstand more force. The heel is shock absorbent in a similar style to the other options. What I do like about the SG12’s is the slimmer toe box area which will help with getting the right feel for your levers. The toe box is also wrapped in a hard plastic outer material which is both light and extremely tough.

If the SG12’s are out of your price range but you’re a fan of the Gaerne brand, you won’t go wrong with the SG10’s either.

The Alpinestars Tech 7’s are the closest rival to the Sidi Crossfire 2 SRS. They play in the same price range and share many of the same features including similar customization when it comes to finding the right size and fit. The straps and shin plates all operate independently making it really simple to find a nice comfortable riding position in your boot.

The toe box is reinforced and abrasion resistant incase of those accidental toe dabs into the tarmac. The sole is created from a really grippy rubber compound which is great for sticking to the footpegs and feeling your way through the corners. Similarly to the Sidi SRS range, the sole and footpeg inserts of the sole area are replaceable.

What I like most about the Alpinestars range of boots is the neatly designed inner calf area. They have minimal bumps and protective plates around the ankle section which helps to keep the boot sitting nice and tight against the bike. I’ve also had many frustrating moments in the Sidi boots where the ankle guard would catch on something on my bike while I’m trying to extend my leg, this isn’t a problem I’ve heard from anyone that rides in the Tech 7s.

All in all, the Tech 7’s are an excellent MX boot that some might call the best feel supermoto boot.

The Alpinestars Tech 5’s are essentially the birth child of the Tech 7’s and the Tech 3’s, although a lot heavier on the tech 7 chromosome. They are a lot closer to being a pro boot with a rookie price tag than the other way around. If you’re looking for an entry pair of supermoto boots, this would be my pick.

Sure there are other cheaper boots available but these really do add a lot of extra value for only a few extra dollars. In my opinion, when it comes to boots and helmets, these are the two pieces of gear where I try to find the middle ground between pro and entry-level. That’s exactly what the Tech 5’s boots are in the under $300 price range.

The buckle system has major upgrades over the tech 3’s and are replaceable. You’re also getting a biomechanical hinge which the Tech 3’s don’t have. Although it’s only on the medial side while the Tech 7’s have a dual-hinge.

You also get a one-piece sole design, similar to the top of the range boots and it has a replaceable sole which is great for longevity and durability. All in all, the Tech 5’s are an awesome value for money Supermoto boot for anyone looking to get started, or not looking to spend on the top of the line boots. Can I Use Dirt Bike Boots For Supermoto?

If you have to make the choice between track boots or best dirt bike boots for supermoto racing, go with the dirt bike boots. They offer much more heel and toe protection since they usually have steel or reinforced toe caps (very useful in the rough dirt) and the heel is often reinforced making them much thicker and larger and far more capable of absorbing knocks and shocks to your heels.
The other added benefit is the ability to slide into the corners foot down, without dabbing your shiny track boot into the pavement. Dirt bike boots were designed to take on damage and withstand impact, so your feet are going to be a lot more protected.
The disadvantage to racing supermoto with dirt bike boots is that you might find it uncomfortable to find your gears/brakes and might even lose some of your “foot finding feel”, as well as some mobility in the ankles. There is however a solution to this problem.

Can I Use Street/Track Racing Boots For Supermoto?

Since the track is mostly tarmac, you might think that racing with a typical street racing style boot would be the best option. However, street boots don’t necessarily offer the protection, durability, or the feel that you need when racing supermoto.
The most common problem you’ll face if you have, or plan to race supermoto with street boots is the lack of heel and toe protection offered by a typical road boot. Think about it, these boots are typically designed for guys taking their superbikes out to the big race tracks – not for those of us racing around a go-kart track covered in dirt.
Supermoto consists of sharp tight corners where you’re often going to have either your leg out or your knee down. On a superbike, you’re never going to have your leg out while going around the corner so you don’t need as much heel and toe protection as you would while racing a supermoto on a small tight, and twisty track.

There are usually only three requirements to ride at a supermoto track. Approved boots, helmet, and leathers. Try not to skimp on either of these 3 vital pieces of gear. They could just save your life. Even if it means you can’t buy the best supermoto boots, try one of the options above as they all tick the “must have” criteria for me.