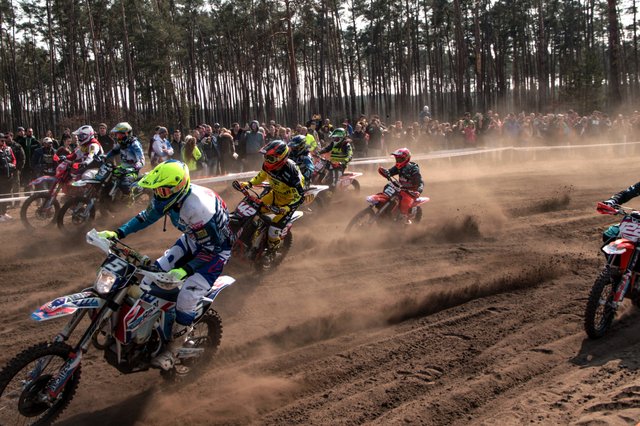 Have you ever been down in the pits of your local motocross track and smelled that beautiful 2 stroke aroma lingering in the air as the engines rev and warm up. It’s not your everyday two-stroke oil that produces that amazing smell. Riders often use a special mix or a certain brand of 2st oil to give better performance while leaving riders at the back of the pack with something nice to smell as they go past.

I set out to find out exactly what kind of 2 stroke oil makes that smell and if it’s possible to run the mixture without damaging your bikes engine or sacrificing performance. I’ve compiled an extensive list of oils that have been recommended across all the popular online forums, as well as from all my riding buddies.

Click the links below to check the latest prices & availability. Drop a comment below if you need help or have other suggestions.

If performance is your number one priority, we’ve covered the best performance 2 stroke oils here. This article will guide your eyes and your nose to the best smelling two stroke oils – voted for by dirt bike riders around the world.

Most modern-day two-stroke oils will offer similar performance, but they can all smell very different. A lot of riders typically go with a full synthetic oil like the Penrite mixture. I generally ride with Motul 710 Full synthetic oil. I might be a little biased since I have a buddy that works in Motul as well as a few riding friends that are involved with Motuls sponsorship of the Roof Of Africa. Now, I’m not going to say this is the best smelling 2 stroke oil – because it’s not, but it certainly is one of the best options for your bikes engine.

It’s also worth mentioning that 2 stroke oils usually smell different inside the bottle to what comes out the back of the exhaust. The Motul 800 oil smells like some kind of ultra sweet nectar right out of the bottle. It smells so sweet it’s almost tempting to give it a little taste. But it doesn’t smell nearly as nice after it’s been burnt up by your engine and expelled from the exhaust.

On the contrary, Castrol A747 has a much sweeter smell when riding. As does the Amsoil Dominator two stroke oil. These are probably my two favorite options when it comes to the best smelling oils for both motocross and enduro riding. They’re quite scarce to come by these days but keep your eyes peeled for any kind of two-stroke premix that has a castor compound in it.

If you want to take things to the extreme and really get something that smells truly delicious when coming out the back end of your bike take a look at Ipone.

Ipone have been making two stroke oils for a while and have actually become quite popular with trials riders as well as motocross racers. I wouldn’t recommend their oils for enduro or trail riding where distance and protection are your primary concern. Be sure to fit some one the best dirt bike air filters to avoid unwanted dirt and particles from damaging your machine.

What makes Ipone so interesting is that their oils are actually infused with fruity smells like strawberries. If the best smelling two stroke oil is all that you’re concerned about. This is it.

Castor oil is the type of lubricant that has been used in many types of engines, even before the birth of the almighty two stroke engine. What makes it different is the fact that it does not burn up in your bikes combustion chamber like many other oils.

This is especially useful if you’re running an ultra lean mix. (Read our guide to running rich vs lean jetting) If your bike does end up overheating, the castor based two stroke oil will still provide the needed protection without turning into a sticky tar like substance.

If you’re looking for the perfect blend between smell and performance I would suggest taking a look at Penrite Race Castor Oil. This is a synthetic ester blend which smells incredible and offers fantastic protection for the inside of your machine.

Castor oil generally smells the best but the wrong type can cause more harm than good by creating a sticky gum like substance around the power valves and rings. If you do go with a Castor oil, be sure not to let it sit in your tank for too long. Let your machine slurp up all that fine nectar to avoid any unwanted hiccups.

An oil like Maxima 927 is a perfect example of a castor based two stroke oil that smells delicious and doesn’t cause gumming up of your rings or power valve. One thing to be aware of is that this is a bean based oil which is not ideal for extreme cold temperatures as the oil particulars tend to separate at lower temperatures which affects both the performance of your engine, as well as the performance of the oil when it comes to protecting said engine.

As you can see, most of the best smelling two stroke oils are a type of castor oil. Keep in mind that smells are subjective, we all enjoy something a little different. However, there is one thing that we all enjoy – the smell of a 2 stroke! If you’re wondering about the pros and cons of a 2 stroke vs 4 stroke check this post.

Let me know which of the above you think smells the best. If you’ve found something that smells better, share your secrets with us and other riders!!