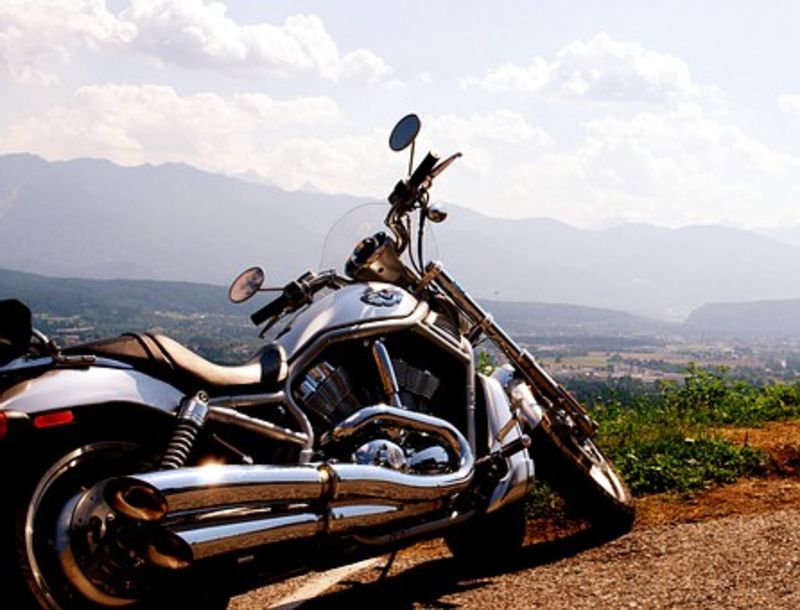 Harley Davidson motorcycles are known for their very unique exhaust notes; other than their stunning good looks, in terms of which they stand head and shoulders above other cruisers in a class of motorcycles their name has come to be synonymous with, their distinctive sound is music to the ears of cruiser enthusiasts. However, in recent times increasingly restrictive noise and emissions laws have meant that Harley Davidson cruisers roll off of the factory floor as pretty quiet motorcycles, with a rather subdued exhaust note. The quickest and cheapest way for an eager owner to unleash the sound of the true beast that beats in his Harley is to fit a slip-on muffler.

Vance & Hines Straightshots are some of the most popular slip-ons for Harley Softails, and for good reason. They add a thunderous but crisp note to your sound.

Check out our other Harley Davidson performance improvement guides:

Why does an exhaust affect the sound a motorcycle motor makes? Well, everyone knows what a firework sounds like when it explodes nearby. There’s a really loud bang – and this sound is caused by a sonic boom from the rapid expansion of gases in the explosion. They’re so loud because there’s nothing around them to absorb the sound waves. Inside your bike or car motor, a similar thing is happening every time your spark plug fires. The difference between the sound of an explosion in your piston and a firework exploding is that the explosion inside your motor has its sound waves absorbed and modulated by your exhaust.

The function of a muffler (or silencer) is to literally muffle the sound of explosions within your motor. It does this by getting the sound waves produced by the motor to cancel each other out, and regulating the pressure of the exhaust gases emitted by the motor. Motorcycles are generally louder than cars because they have much shorter pipes and less room for large mufflers.

Both stock mufflers and aftermarket mufflers generally have baffles too. These are small inserts that are installed near the exit of the muffler, and they also aid in noise reduction by causing gases and sound waves to bounce around more, and thereby be absorbed by the packing material in the muffler.

Can’t I Just Remove the Baffles from My Stock Pipe to Get A Better Sound?

A cheap solution, touted by DIY mechanics, to a bike that’s deemed too quiet is to simply remove the baffles from your stock exhaust. Why buy an aftermarket muffler if you can make your bike louder simply by removing the baffles? Proponents of baffle removal also claim that by removing baffles you’re allowing your exhaust to flow more freely and thus increasing performance. So why not just do this?

Increasing engine performance isn’t a simple science. Some back pressure from the exhaust is necessary, and without it you’ll likely lose torque and low-end power, and some horsepower across the rev range, even if you do gain a little at the very top of the rev range – which you won’t be using for the majority of your riding anyway. And while removing baffles can make your bike louder, that doesn’t mean it’ll sound better. Often, bikes with baffles removed simply sound obnoxiously loud. A good aftermarket muffler, however, will give your bike a much more pleasing sound, as well as increasing the volume, but not to an annoying degree.

Does A Slip On Exhaust Increase Horsepower?

In short, no, a slip-on exhaust probably won’t increase horsepower. When you put a slip-on muffler onto your bike, you’re changing the airflow and the back-pressure from the exhaust gases a little, so you might see a tiny increase in power and notice a very minor difference in power delivery, but generally what you’re making a major change to is the way sound waves exit your exhaust. The makers of slip-on mufflers know that the vast majority of motorcyclists who buy these items are looking for a more aggressive sound from their bikes, and they have designed their products to provide maximum gains in that area: sound.

What Are Slip On Exhausts?

Why are slip-on exhausts called “slip-ons”? The answer to that question is that the name comes from the fact that you’re able to quite literally slip them onto your bike’s existing exhaust; generally installation of an aftermarket slip-on is a very easy task, even for the most mechanically inept motorcyclists. You only have to have a very basic grasp of mechanical knowledge to install an aftermarket slip-on exhaust. To put one on, you simply remove your stock muffler, loosening whatever nuts, bolts and fixtures hold in in place, and then slip the aftermarket pipe into place, and tighten everything up. If any gasket paste is required, it’s generally supplied with the aftermarket pipe.

When installing a performance exhaust, you might want to consider optimising your air/fuel ratio with an auto tuner for Harley Davidson motorcycles.

Does A Slip On Exhaust Void Warranty?

All right, so you’ve just ridden your Harley home from the dealership, and it’s brand spanking new, and still has that showroom shine…and you can’t wait to start modifying your new toy. The first thing on your list is the same thing that’s at the top of most red-blooded bikers’ mod lists: an aftermarket muffler, to unleash that rolling thunder sound you know the stock pipe is holding back. There’s one little problem though: are you going to void your Harley’s warranty by doing this?

While it might be an official policy that modifying your brand new motorcycle in any way technically voids the warranty, in most cases this is not enforced in practice, especially when it comes to a modification that’s as common as aftermarket mufflers. A slip-on exhaust really won’t change or affect your motor much, and is extremely unlikely to cause any sort of engine problems at all. Ask your local HD dealer though, but because they want to retain your business and keep a good reputation as being attentive to their customers’ needs, they’ll likely tell you that it’s absolutely fine to put on an aftermarket muffler, and that it won’t void your warranty.

Vance & Hines Straightshots are some of the most popular slip-ons for Harley Softails, and for good reason. They add a thunderous but crisp note to your sound.

Vance and Hines Straightshots are some of the most well-known and popular slip-on exhausts for Harley Softails, and for a very good reason – a few very good reasons, actually. The level of the workmanship on these pipes is fantastic, and they’re unmatched in terms of quality. The sound improvement over stock pipes is immense. Straightshots come with removable baffles, but even with the baffles in the sound is deep and raw, yet crisp. All of this quality and great sound does come at a price, though; these aren’t the cheapest pipes around. That said, there are more expensive pipes out there.

Vance and Hines are a popular favorite for Harley riders around the world. When it comes to slip-on mufflers. They’re classically known for great sounding, good-looking options at an excellent price.

If you want to improve the sound of your stock Harley , but are feeling a little apprehensive about shelling out . These bad bones aren’t necessarily cheap, but they won’t break the bank either. You can expect the same top notch quality as the rest of their products , and as for sound, there’s a very noticeable improvement over stock setup. These slip-ons are a great option for all Harley riders looking to spice up their ride.

If you’re looking for some seriously loud sound – about as loud as you can legally go – the name “Neighbor Haters” should tell you all you need to know about these slip-on pipes from Cobra.

Few slip-on pipes are more aptly named, in terms of what they achieve, than Cobra Neighbor Haters. Now, whether you hate or love your neighbors, with these slip-ons on your Hog, you can bet that the people in your street will know every time you leave your house or come home. They’re about as loud as you can legally go, but the sound they produce isn’t obnoxiously loud, and you can even hear your music over it. They’re not the cheapest pipes, but they’re far the most expensive too; they represent a good mid-range price. The manufacturing quality is really good for what you’re paying for them as well. The main thing about these, though, is the sound you get: deep, rolling thunder.

When it comes to performance slip-ons, Rinehart Racing is, many Harley enthusiasts believe, the gold standard. Their 4” slip-on mufflers are peerless in quality and give a fantastic upgrade in sound.

A lot of Harley enthusiasts consider the gold standard against which other slip-ons are measured to be Rinehart Racing pipes. The quality of Rinehart Racing pipes is almost unmatched, and these made-in-America pipes have earned their reputation through their workmanship. The sound they add to your cruiser is a perfect mix of aggressive volume, rumbling “potato potato” thunder, and a deep bark when you rev the bike, all without being excessively loud; you can still speak (instead of yell) over these when the bike is idling beneath you. Of course all this quality does come at a price, and these pipes are pretty expensive.

For slip-on mufflers that give your Street Glide a good rumble and roar, these DNA 4” slip-on pipes are a great bargain.

If the price of many slip-on mufflers puts you off buying them, but you could really use an upgrade in sound for your Street Glide, then these 4” slip-ons from DNA might be just what you’re looking for. They’re finished in gleaming chrome, and will add a bassy rumble to your Street Glide, and a decent roar at revs, which is a definite improvement over the stock pipes. The best part about these slip-ons is the price; they aren’t much more than $120, and you won’t find a better price for any other slip-ons anywhere, really. Of course, this does mean that you’re not getting the same quality as Vance and Hines or Rinehart Racing, but these are decent slip-ons nonetheless.

For slip-on pipes that make both an aural and a visual statement, these slip-on fishtail mufflers from Draculextreme are guaranteed to make your Road King stand out in a crowd.

If you want your Road King to seriously stand out in terms of looks, few slip-on mufflers make quite as bold a statement as these fishtail/sharktail slip-ons from Draculextreme. And these pipes don’t only look boldly distinctive, they add a nice deep note to your Road King’s motor, without being excessively or obnoxiously loud. Of course, the look of fishtail pipes isn’t for everyone, so the styling of these pipes might be a little too over-the-top for some riders. The price, however, is one thing everyone can agree on – at under $200, these definitely won’t make your wallet too much lighter.

If you don’t want to get into complicated retuning and engine modification, or the generally intensive labor involved in swapping out your entire OEM exhaust system, and all you’re really looking for is a better sounding Harley, perhaps with a smidgen of increased performance, then fitting a slip-on muffler is probably going to be a perfect mod to do. It won’t break the bank (unless you really go all out for a set of Rinehart Racing pipes), and it’s easy to do with only a bare minimum of mechanical knowledge. Your bike is guaranteed to sound better afterwards, and that alone will keep you smiling for many happy miles.