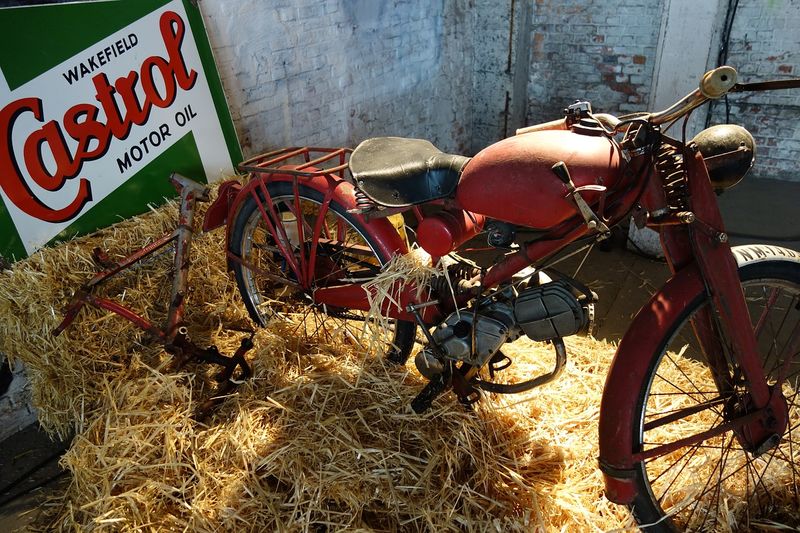 Oil is to your bike as blood is to our bodies; without it, your bike will die as surely as your body will when drained of blood. Okay, so you know that changing your motorcycle’s oil is important, as is regularly keeping an eye on the oil level…but what oil do you put in your bike in the first place? Regular, cheap car oil from the supermarket? Is that okay? Motorcycle-specific oil? And is mineral oil all right, or should you be using synthetic or semi-synthetic? Does the climate you live in determine what oil you should use? Read on for the answers to these questions.

Red Line is a name often associated with Harley Davidson bikes, but their 20W-50 oil can be used in a range of bikes with wet clutches.

Hot weather combined with engine heat means a lot of stress for your motor. Mobil 1’s Racing 4T Motorcycle Oil has been designed to work effectively at really high temperatures.

While Mobil 1’s 4T Motorcycle Racing Oil might have the word “racing” in the name, it’s definitely not only for riders who take their bikes to the track. This fully synthetic oil has been developed by Mobil 1’s engineers to perform at its best through a broad temperature range, even at really high temperatures.

In hot weather, when you’re riding hard, your motor is going to need all the lubrication it can get, and Mobil 1’st 4T Motorcycle racing Oil has been designed to do just that.

Red Line is a name often associated with Harley Davidson bikes, but their 20W-50 oil can be used in a range of bikes with wet clutches.

While Red Line motorcycle oils are often associated with Harley Davidson cruisers, their 20W-50 oil can be used on a variety of bikes. It provides the same high level of lubrication and engine protection that any high quality fully synthetic motorcycle oil does, and has additives designed to minimize friction that are compatible with wet clutches added to it.

According to Red Line, their oils can go longer before changes than other brands, and their ester base stocks add even more protection and sealing properties. It’s not the cheapest oil around though, but many owners swear by its quality functioning as the best motorcycle oil for sport bikes and vintage classics alike.

Modern sportbikes have been pushing the limits of performance further than ever before in recent years, and as their motors become more complex in order to wring out every last drop of horsepower, so too do their needs for top quality lubrication.

Motul’s 7100 oil range has been designed specifically for modern high performance machines, and if you ride a powerful sportbike and consistently push your bike to the limits, you’re going to want an oil that can handle the kind of stress your motor goes through. Motul 7100 isn’t the cheapest oil, but it’s going to give your sportbike’s motor the kind of protection that cheap all-purpose oils really can’t.

If you’ve got an older bike, and you’re not redlining it all over the place, a good semi-synthetic oil will do just what you need, and Castrol’s Actevo Semi-Synthetic oil will keep your old bike ticking over like new.

Not all of us motorcyclists ride the latest cutting edge high performance machines, and neither do we all tear around racetracks bouncing the needle off the redline with every gear change. If you ride at sensible speeds, mainly for commuting, or you ride an older vintage bike that isn’t about extreme power and futuristic technology, then a good quality semi-synthetic oil will do an excellent job of providing engine protection and lubrication without breaking the bank.

Castrol’s Actevo Semi-Synthetic Motorcycle Oil can be used in a wide range of four stroke bikes from a number of different eras of motorcycling, and it provides really good protection and lubrication at a range of temperatures. If you have an extremely high performance machine, though, you’ll probably want to go for fully synthetic oil instead.

Castrol has designed their Power1 V-Twin oil specifically for high capacity four-stroke twins like Harleys. This oil does a great job at keeping your Harley’s motor purring.

Harley Davidson cruisers, being high capacity air-cooled motors, generally run at pretty high temperatures. With your Harley running hot, especially when the weather out is warm too, you’re going to want a really high quality oil to keep your motor running smoothly, and keep the engine components safely and effectively lubricated. It would be a good idea to incorporate some good quality motorcycle engine coolant and antifreeze along with ensuring your air filter is properly maintained and lubricated with the right air filter oil.

Castrol’s 06116 POWER1 V-TWIN has been designed to do exactly that. While you could technically chuck any motor oil of the right weight and viscosity into your Harley’s motor and run it on the cheap, why would you when you could have so much more effective protection for a few extra bucks. This isn’t the cheapest oil, but it’s definitely a seriously effective lubricant for your big capacity V-twin cruiser, and it comes in a handy six pack.

The Importance of Oil

Oil is the thin but important barrier that stands between your bike purring like a happy kitty and rattling like a bag of spanners before seizing up into a mess of molten metal and broken parts. As you may know, the primary function of oil in a motor is as a lubricant. Motorcycle motors consist of a lot of metal parts, all of which move really quickly, moving against each other.

Without a thin layer of oil to serve as a vital lubricant to keep these parts moving, metal would be grinding against metal, which would lead to immense heat being generated by friction, and without oil the metal parts would simply break or melt into one big lump of scrap. At that point, the only place your motor would be going would be to the garbage dump in the back of a truck. Read our guide on troubleshooting why a motorcycle is overheating.

Along with changing your motorcycle tires, which is something you’ll do particularly often if you ride a dirt bike (review the best dirt bike tires here), changing your bike’s oil is one of the most frequent maintenance tasks you’ll be doing. This is not to be confused with adding two-stroke oil to your fuel – very different oils. It’s also probably the most important one, at least in terms of engine health. Check your owner’s manual to see how many miles your motorcycle can go between oil changes, and make sure you stick to the specified schedule.

A lot of people assume that just about any motor oil is fine to use in motorcycles. After all, why you should pay top dollar for motorcycle-specific oil when you can buy a few gallons of car oil from any supermarket for way cheaper? Doesn’t it do exactly the same thing, as long as it’s the same viscosity and weight specified by your owner’s manual?

Technically, you can use car oil in your bike, as long as you’re using the correct oil weight, as specified by your bike’s manual. However, there is one important difference between car oils and motorcycle oils that should make you think twice about using car oil in your bike on a long-term basis: car oils are formulated to lubricate the engine only, not the gearbox or the clutch. In cars, these parts have their own separate oils, but in most motorcycles, the engine, gearbox and clutch, pistons are all serviced by the same oil.

Thus, if you use car oil in your bike, you’re likely to start seeing clutch slippage after a while. Also, car oils often contain detergent additives, which, over time, can damage your bike’s engine components. Over the long term, it’s definitely a better idea to put motorcycle-specific oil in your bike.

Can I Use Fully Synthetic Oil in My Motorcycle?

This is another question that motorcyclists often ask about oil. The answer to the question about whether to use mineral oil, semi-synthetic or synthetic oil depends on what kind of bike you ride and how you ride it. While one can get into quite a bit of scientific detail about the differences between these three types of oil basically, for older, lower-performance motorcycles that aren’t put under a ton of stress, mineral oil, which is the cheapest, is fine.

If you have a newer motorcycle more oriented toward performance, and you ride in more adverse conditions, and ride hard every now and then, you should at least use semi-synthetic. If you’re riding a newer, high performance machine that you frequently push to the limits and rev high, or if you go on long cross country tours, or ride in extremely hot or cold weather – basically if you’re frequently putting stress on your engine – you should use synthetic oil.

For most riding that isn’t too extreme, semi-synthetic motorcycle oil will do a decent enough job of lubricating your motorcycle’s engine, gearbox and clutch. As with most things in the realm of motorcycle maintenance, check your owner’s manual, especially if you have a newer, high performance motorcycle.

If you’re out on the road and you see that your bike, which is running on fully-synthetic oil, needs topping up, and the only oil you have access to is semi-synthetic, then yeah, you’ll be fine topping up with semi-synthetic. It’s definitely way better to run your bike with a mix of oils than low oil. Just make sure that as soon as you’re able to, you do a full oil change and go back to the oil type specified by your owner’s manual.

Can You Mix Semi And Fully Synthetic Motorcycle Oil

Synthetic motorcycle oil is mineral oil that has been treated in a lab to refine it and take its performance as a lubricant to the best level it can attain. In a nutshell, yes, fully synthetic oil is “better” than semi-synthetic oil, at least when it comes to providing lubrication in extreme conditions – really high heat, high revs, long periods of stress.

Just as it’s pretty important to primarily use your motorcycles front brake for slowing down and stopping your bike, it’s really important to choose and stick with the best motorcycle oil for your bike, keep it topped up and change it at regular, sensible intervals.

These days motorcycle engines are more complex and powerful than ever before, but modern motorcycle oil is more than up to the task of keeping these complicated beasts running like they should. Pick a good quality oil, change it as often as your manual recommends, and your engine will run like new for tens of thousands of miles.