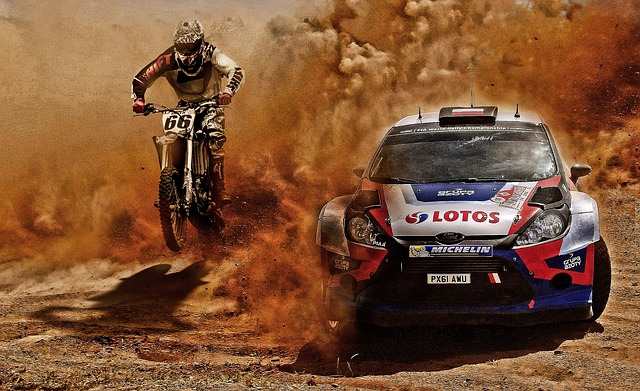 Navigation Show
The Best Dirt Bike Racing Games
2. Monster Energy Supercross 3
4. MX vs ATV All Out
1. Trials Fusion
3. MX GP 2019
Who Are You Buying The Game For?
Last Checkpoint

What do dirt bike riders enjoy when we’re not out riding the trails and tracks on the weekends? Simple, we like riding the track and trails from the comfort of our own home on a Playstation or Xbox.

Growing up I was always a gaming geek. I’ve owned hundreds of games if you count from the early days of my very first Playstation 1 right up to the new models. I would love to know how much money I’ve spent on Playstation and computer games over the years, but that’s not what we’re here for.

My favorite types growing up were all racing games from Cars ATVs, UTVs, Motocross, and Dirt bikes. You name it, if it involves racing I played it. Racing games and game graphics have improved insanely over the years which makes them so much fun.

All this excitement and improvement in the gaming world makes it very difficult to figure out which is the best dirt bike game on the market. If you’re looking to buy a game for yourself it’s a bit easier as you have it more time to do the research and watch a lot of the video feedback from other players. If you are looking to buy a racing game as a gift for your child or for a family member or friend you’ve come to the right place.

I’m going to give you as much information about all the dirt bike games currently available so that you can make the best choice when looking for the most exciting and adrenaline-pumping dirt bike racing game for Playstation, Xbox, Nintendo, and PC.

For all the online gaming enthusiasts looking for the ultimate racing game, these are the most exciting dirt bike games. 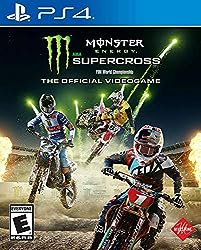 Some might say that Supercross 3 is one of the best dirt bike games and it has a great ability to make even low-velocity scenes look like insanely dangerous shoulder-to-shoulder racing.

Riders apparel looks exciting and fully customizable according to the top racing teams. True fans will know this has been a feature of most Supercross games since the franchise debuted in 2018 and is one of many that go all the way down to this same range of fun.

There are some differences here from the previous Supercross editions. One of the main changes is the bike handling ability which feels more connected than in previous editions, but the difference doesn’t seem too much. Racing modes remain to be reasonable because there are two handling settings – standard and realistic.

Standard mode has the side to side and mashup fitting while reality challenges you to take control of weight shifting like the past two games regardless of the handling.

Handling can be really interesting. It’s really fun learning how no to mess up a rhythm section and miss the landing post by a jump or 2 or 3 or 4. Similarly, trying to scrub a jump too late or riding into a trackside tough block is more than enough to launch you and your ride into the air. If you mess up – rewinds are allowed, but this can be deducted from your overall points.

Once you learn the dynamics and physics of the game as well as the dirt bike handling dynamics you really get to grips with the gameplay. Learning the ultimate holeshot start to the first corner or cruising effortlessly over the whoop section gives a lot of joy in learning the handling and racing techniques.

Racing in the 450cc class gives you more of everything, more power, distance, height, and not to mention bigger and better crashes. In this version, you can also race with the female riders who are in fact, just as good as the guys (surprise, surprise).

The Monster Energy Supercross 3 is a modest but awesome two-wheeled racing game that is action-packed and fit for all racing game enthusiasts. Plus, the music in this game is epic. Check out my recommendations and playlist for more awesome motocross music 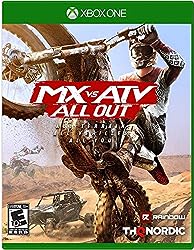 It’s funny to say this about racing games but I felt that nostalgic feel hit me in the face when I booted up MX vs. ATV All Out for the first time in a while. I’ve always enjoyed Rainbows take on all-terrain vehicles but I never really appreciated how different this game feels from some of the competition.

What sets this game apart is the awesome outdoor open spaces that are exciting for any rider from enduro, trails and motocross. Although I’m not so sure that this game expands on any boundaries that other games do, other than the open-world riding terrain, which as I said, is my favorite part.

This game has gone a long way back into development and perfection which has resulted in a wide variety of players who have fallen in love with the series in the first place. In many ways, this makes MX vs ATV All Out feel more like a throwback to a different generation of gaming.

Some great parts of the game are to do with how it controls, especially when you’re riding in the dirt around loose corners and boosting yourself into the air with a swab of the analog sticks. There is far more to the gameplay than you might initially expect.  Some impressive examples include using the clutch to get an early lead on a jump or double clutching to get a slight boost up a hill which is all extremely realistic.

This game is action-packed with so many features to learn along the way. Once you’ve mastered all the advanced handling techniques, nothing beats exploring the wide-open world levels where you can take on your opponent by climbing up massive mountains to reach the end goal. 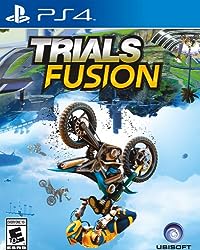 Trials Fusion is not your typical dirt bike PlayStation game. It’s not exactly racing although it does require a lot of skill. In this game, the player will experience incredible gravitational dynamics and learn to understand the physics and mechanics behind riding a motorcycle in a trials riding environment.

Not only does this game include all types of dirt bikes, ATVs, and other types of bikes but it also teaches the player about the incredible physics behind different movements riders are subject to while on a dirt bike.

This includes realistic examples of accelerating, braking, jumping, preloading, and crouching or simply trying to maneuver the bike through advanced obstacle fields. All the movements are incredibly lifelike and offer a unique way for riders and players to connect the mind-body muscle without risking injury on an actual dirt bike.

Trials Fusion is intended for the widest possible audience from motocross racers to Enduro fanatics. This game is a valuable rarity. It’s success is based on it’s super simple nature and uncompromisingly precise mechanical calculations for dirt bike enthusiasts around the world.

As demanding as this game is, it still provides players with enough freedom and rhythm to find entertainment through the many courses which are often on the verge of being sadistically difficult to complete.

This game is a combination of insane trials riding jumps and platforms combined with motocross-style ramps and highly believable physics – for the most part (the rest is just a game). Different bikes have different weights and weight to power ratios which change throughout the gameplay as one progresses through the different levels.

This must be one of the most challenging dirt bike games available. This game is action-packed and super fun while also being incredibly educational as riders and players learn the dynamics and physics behind riding a bike like a pro. 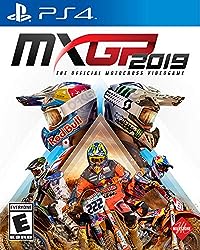 No one will ever say the people at Milestone don’t know or love their bikes because they’ve been making dirt bike games officially licensed by FIM Motocross World Championship. Starting with what’s good is the simulation of the physics and mechanics that determine the level of gameplay when you’re riding your bikes around the game tracks and obstacle courses.

It plays according to its very nature of MXGP 2019 as it should be heavily dependent on physics which means the actual foundation of the game is more than just functional scrubs and wheelies on the bikes in flat, twisty and grimy conditions all the way to raining and deterioration of the tracks to the final corner.

Good to know during the course of races is knowing when to accelerate and when to decelerate, managing and properly using the brake and shifting the weight of the rider during turns or while in the air comes together for a fundamentally different style of game play.

There’s a ton of challenge to be found in this game and for the uninterested players, MXGP 2019 won’t be much of a cakewalk unless you enable the handling assistant and turn on the general physics of the game which could take some getting used to.

A simple although effective rewind function allows players to balance the difficulty by taking all the training wheels off and playing without any assists should make for a much more challenging race arena.

An exciting game experience design is generally quite good. What makes it even better is the way in which the track degrades as more laps go by. The degradation calculation is near perfect in MXGP2019 as the track gets visibly more wear and tear as races progress.

This leads to an exciting final few laps of a race with the degraded track full of puddles after rainfall can be a tricky last lap. Overall the experiences of MXGP are built on a solid foundation and as one progresses through the game, you earn experience points to contribute to your prestige level 2 matter where you finish races purchase customization from a pretty decent range of options and you oven get custom options for cosmetics to your bike and your rider.

Who Are You Buying The Game For?

The first thing you want to look for is not actually about the game. What you want to first consider is who you are buying the game for.

Are you buying this game for a motocross racer? How about an enduro trail rider? What about trials athletes, or a sportbike track racer?

The good news is I have a game for each of these top riding situations that are guaranteed to fit the needs of your search.

Another good gift suggestion is movies and series about dirt bikes and motorcycles. I’ve put together a huge list of my all-time favorite dirt bike movies, series, and documentaries. It includes links to where you can watch them for free as well as where you can purchase the full sets.

My personal choice would have to be either Trials Fusion or MX vs ATV All Out. My pick for Trials Fusion is because of it’s awesome physics and the learning needed to master the techniques to progress to the next level. It’s very challenging and keeps the play engaged. MX vs ATV All Out is one of the few games that allow riders to explore open lands making more adventurous than simply racing around a motocross track.