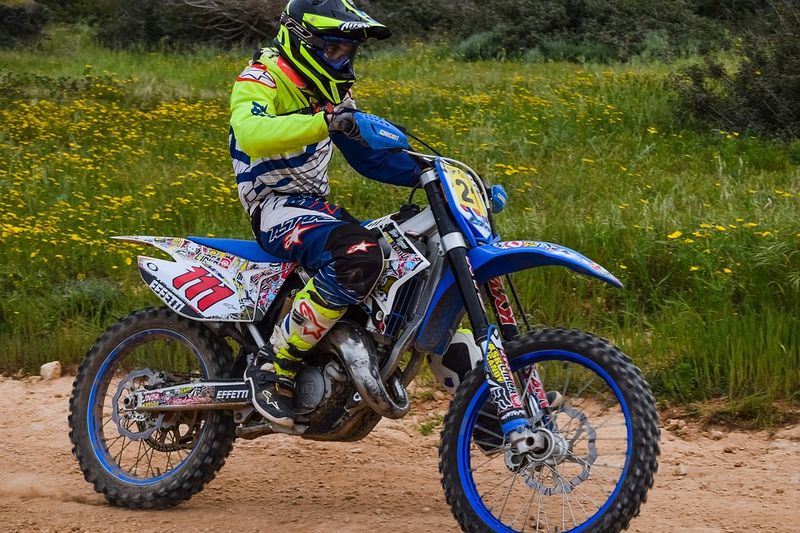 The vision required on street is necessarily based on the flow of traffic and the planned route of an upcoming freeway exit. A motocross rider glides from inside to outside line, where a wider spectrum of vision is needed to execute. What they do have in common is that a helmet’s main prerogative is to protect the rider from head injuries during a crash and/or collision on a ride.

Whether you are riding on the street or in the dirt, two-wheel enthusiasts love being atop their motorcycle with a hand full of throttle. Motocross riders take on the unpredictable dirt trails off the beaten path while a street motorcycle rider loves the open road leading to the next destination. Motorcycles that are purpose-built for the environment they are ridden in stand out from one another.

Sleek aerodynamics for street and open fenders for moto is just one differentiating factor; let’s not even get started with the suspension, tires, and ride height. Protecting the motorcycle rider’s noggin from head injuries is a concern throughout the industry.

Both street and dirt bike motorcycle helmets will be constructed of similar impact resistant materials. Ranging from the outside composition of polycarbonate to carbon fiber, to the inside with expanding polystyrene foam that is built to absorb the energy from an impact to the helmet. Mutually the helmets attach to the rider by slipping it over their head and strapping down by a D-ring under the chin.

Motocross helmets are purpose built in ventilation and visibility, not aerodynamics like its street cousin. One distinct quality of these helmets are the protruding chin guards. The chin guard is made specifically for increasing ventilation to the rider while also giving an advanced line of protection in a front-facing crash. Watch any motocross video and you will see that a lot of impacts include the rider falling forward. With their hands preoccupied hanging onto the handlebars, the reaction time of getting their hands in front of them to brace the impact in a crash is reduced.

The chin guard is going to be the impact point when the rider’s head is going to hit an obstruction. Having it project out from the face protects the riders face and eyes with less chance of the helmet crushing inward. It can also be noted that the chin guard allows for my air flow up to the rider without irritating the eyes, which are covered by goggles.

Another distinctive feature of the motocross helmet is the visor. This is attached to the helmet specifically for vision. Roost from a leading dirt bike rider will inevitably hit the rider behind so the visor is a great tool to deflect rocks and mud away from the line of sight. Tilting the head down will allow the visor to shade away from the sun from the rider’s vision. One thing to note is that the motocross visor is not for collisions and will not brace the impact of a crash. A light crash can result in a broken visor.

Street motorcycle helmets allow the rider to close the visor to create a closed system, free from the wind. Their spherical shape is great for aerodynamics so the motorcycle rider’s neck can hold up the extra weight against wind resistance, easier. In most cases, motocross dirt bikes will not reach the speeds capable of a street motorcycle. On a ride, the operator needs to be protected from the noise and wind in order to properly operate the machine. Think about getting a bug in the eye at 80 mph!

If a street motorcycle helmet is not constructed with aerodynamics in mind, the excessive drag caused by wind resistance can fatigue the rider on a long ride while also not allowing him or her to move freely with the motorcycle.

In the scenario of a street crash, the sleek design of the motorcycle helmet is also going to be favored as it moves quickly over an abrasive surface for long distances. Having extended features like a chin guard and visor on a motocross helmet, can place the rider at risk of a roll or hyperextending their neck. Almost all street gear is made specifically to slide in a road crash, resulting in less injury.

The closed system of a street motorcycle is activated by pulling down a visor in front of the eyes or by pulling down the entire front assembly that includes a fixed visor. Motocross helmets do not have a visor and eye protection is accomplished only by sliding over a pair of goggles over the helmet to fit snuggly against the rider’s face.

Goggles are worn around a moto rider to eliminate all possibilities of debris compromising the rider’s eyesight. Dust is a necessary evil in a dirt bike ride. Motocross goggles are stretched over the helmet to squeeze in the foam sealing of the lenses to create a closed system just around the eyes. Simply sliding over a lens over the helmet opening would not be advantageous to a dusty trail ride as dirt could easily reach the eyes, causing the rider to slow down or stop.

The wide opening of a motocross helmet allows goggles to slide over the helmet and also to open the range of sight for the rider. Motocross riders are constantly keeping their head on a swivel as they cross race lines, look for obstacles, and maneuver around the course. A street rider does not necessarily have to be focused about what is behind them (of course you should be aware) and their line of sight is usually always forward. Ask any dirt bike rider on how to get back to camp the fastest and they will dread on riding back fifth gear tapped across a flat access road. Motocross dirt bikes are not intended to be comfortable so sitting on the seat for 20 miles is a big strain on the bike and on the rider’s neck due to the style of a motocross helmet.

The composition of a dirt bike helmet includes an extended visor that is going to create wind drag and an exposed chin-neck area from the elongated mouth guard, is perfect to send a nice wind chill up to the rider.

Safety: DOT and NHTSA and SNELL

Eliminating the risk of head injuries is the number one priority for both motocross and street motorcycle helmets. As discussed above, the outer shells of motorcycle helmets are made of materials such as polycarbonate, carbon fiber, fiberglass, or Kevlar. These materials will vary the overall weight of the helmet but are your first impact point in a collision.

Now when it comes to choosing a dirt or street motorcycle helmet, pay attention to the acronyms. The Department of Transportation, DOT, is going to be your most familiar safety certification that comes straight from the National Highway Traffic Safety Administration, NHTSA. The DOT creates a series of standards that each helmet must pass in order to be sold for on-highway use in the United States.

These tests include impact tests in acceleration, penetration, and retention; among others. Now the NHTSA does not specifically test each helmet to be up to the DOT’s safety requirements, but it upholds a set of requirements and requires a helmet manufacturer to self-certify each model in order to place a DOT certified sticker on the back of their helmets.

DOT and NHTSA certification is going to the basic guarantee that you will want to look for on a motocross and street motorcycle helmet. For those looking for a second line of safety testing, the SNELL Memorial Foundation provides advanced helmet testing in what they verify as more “real life situations”. SNELL certifications are going to be found in street and dirt racing as another minimum requirement for a rider in their helmet choice.

In one last similarity for both street and motocross helmet safety is the implementation of modern impact technology into each brain bucket. Multi-Directional Impact Protection Systems, MIPS, is a low friction layer in between the outer and inner shell of a helmet that is allowed to move just a couple millimeters during an impact. The impact energy is differed away from the skull in order to minimize the blunt force, minimizing the risk of a head injury. This technology is scientifically proven to lower the rotational movement of the brain. This feature can be found in both motocross and street helmets and is one you should pay attention to.

Top Choices in Street and Dirt

To both compare and help you choose a great option for both types of motorcycle riding, here are two helmets made specifically for their environment.

Ultra-lightweight with a mixed carbon fiber shell, the moto helmet is both SNELL and DOT approved with a MIPS safety system. A uniform shape that connects the chin guard to the entire helmet shell, its open eyesight allows for a set of goggles to be slipped over and extra ventilation ports to keep the rider cool. This helmet only weighs roughly three pounds which helps with not having the rider’s neck becoming fatigued. Another added safety feature is magnetic cheek pads that allow for emergency responders ease in removing the helmet in a crucial situation.
Bell has featured in many of our recent reviews. The MX 9 Adventure helmet is one of the newer models that we’ve been very impressed with. It actually claimed the runner position in our best ATV Helmet post.

A complete closed system does not have to include lack of communication, this street helmet is pre-wired for Bluetooth headsets. Sleek design with a MIPS safety system which has just been introduced to the pavement world. Although not made of a lighter material like carbon fiber, this polycarbonate shell helmet comes in at 3.4 pounds. The shield is also transitional. A rider does not have to wear sunglasses in the day under the helmet as the visor is anti-scratch, anti-fog, and changes with the sunlight.

Does it Matter to Wear a Sport Specific Helmet?

Well, as both the street and dirt helmets come with the same certifications and safety checks as the other, you could wear one helmet for one sport. But as many may think reading this, you run the risk of looking like the squirrel.
Motocross helmets are made specifically for keeping the dirt out of your sight and a crash from smashing up your pretty face. Riding at 100mph (slow it down now) over a long distance is going to require the sleek design of a street motorcycle helmet. Since each helmet is made specifically for your sport’s environment, I think its best to keep it in the family.

So, are motocross helmets road legal? Yes, they are.