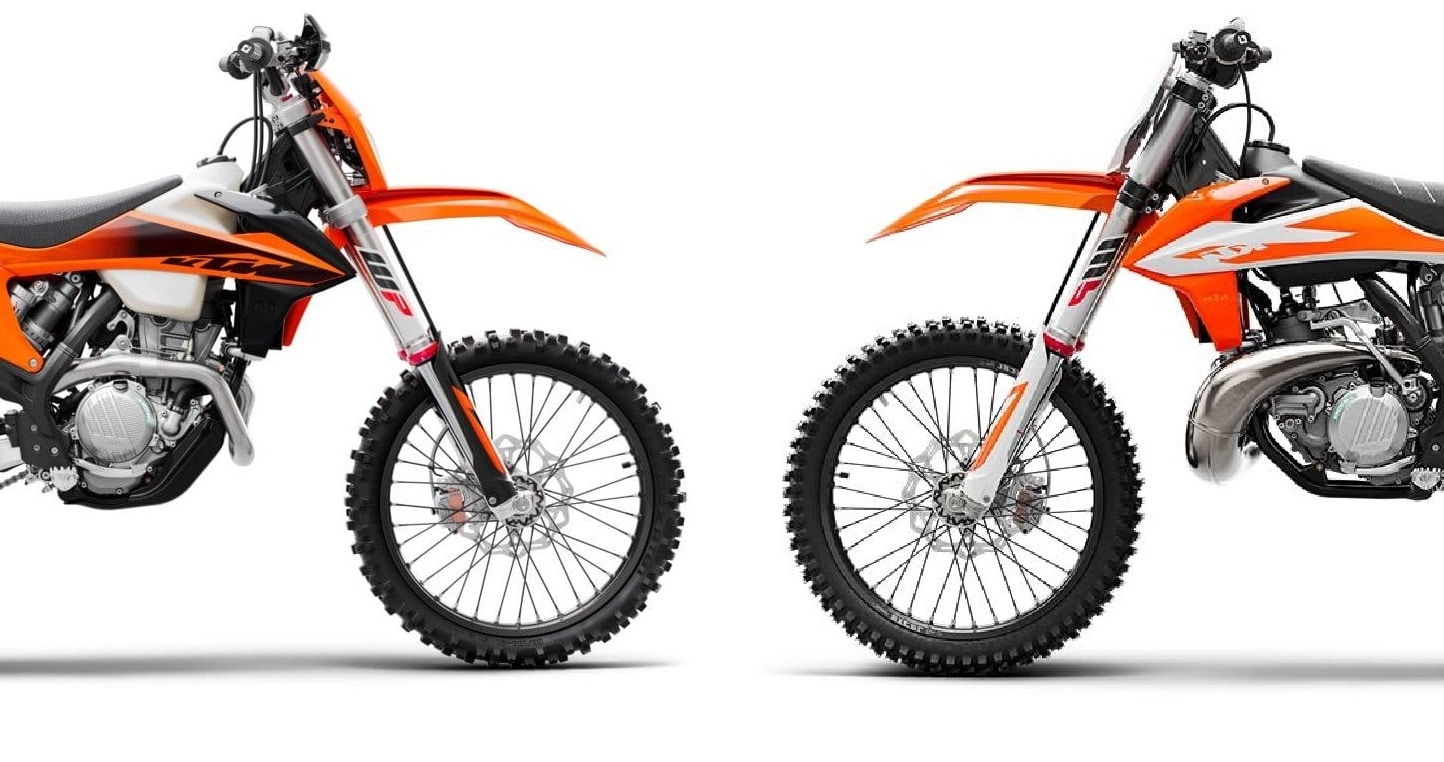 When it comes to comparing a 2 stroke vs a 4 stroke, neither one is outright better than the other. They both come with a list of pros and cons. Ultimately, the decision to buy a 2-stroke vs 4-stroke comes down to rider preference, skill, and the intended riding style. 4 stroke dirt bikes are preferred for motocross and supercross while 2 stroke bikes offer more advantages for enduro and trail riding.

2-stroke weighs less than their 4-stroke counterparts. The additional weight in the 4-st comes from the extra moving parts in the engine. Whether you want a heavier or lighter dirt bike will be determined by the type of riding you plan to do.

Here’s a guide to the different types of dirt bikes

What’s Important to note is that the extra weight requires extra energy to move the bike which is not ideal if you’re trying to move frequently and nimbly like in technical enduro riding. On the contrary, having a slightly heavier bike could be a good thing if you consider the fact that the ground is moving against the bike – with more weight comes more stability.

Generally, a light 2 stroke will feel better on more technical trail riding. But when riding open high-speed terrain a 4 stroke offers more stability due to the increased weight. This is one of the biggest factors for riders to consider. 2-strokes don’t compete with 4 strokes when it comes to high-speed open stability, but 2 strokes outperform 4 strokes when it comes to tight twisty and technical riding.

While the weight of the bike does affect its maneuverability, there are a few key distinctions between the two. For our purposes, weight impacts, and is impacted by, the total overall level of movement and forces exerted by the rider, the ground, and the bike’s natural forces of momentum and inertia.

On the other hand, maneuverability focuses mainly on rider force – or how easy it is to move the bike in the direction you intend. The ability to lean a bike and switch directions is affected by the overall weight of the bike, as well as the number of moving parts of the bike.

Since two-strokes have less moving parts, the amount of inertia running through the bike is lower, making it more nimble and maneuverable. Maneuverability is also affected by the rate at which the bike’s engine produces power.

Some bikes are able to reach peak RPM faster than others. The speed at which the engine is able to outlay power will have a big impact on how the bike handles. A heavy 450cc dirt bike with fast power delivery will help to make the bike feel lighter. In contrast, a lightweight bike with slow power delivery can actually feel heavier and harder to maneuver.

250cc 2-strokes have less horsepower at ~46hp compared to a 450cc 4 stroke which will have around 55hp. Both of these bikes will have a unique power curve like in the graph below by dirtrider.com. This shows the horsepower delivery of the 2020 Husqvarna FX 350cc 4-stroke which increases in a relatively gradual straight line with RPM’s maxing out at 11,700 and 49.1 horsepower.

You’ll see the 2-stroke power curve is relatively similar which follows an upwards straight line but you’ll notice on the torque output delivery reaches an initial spike then drops off before climbing again. This is the visual representation of the power band. In the below picture of the 2020 Beta 300 2 stroke The chart maxes out at 8,300 RPM and 39.3 horsepower – quite a lot less than the 4 stroke counterpart with only 50cc more.

4-strokes deliver smoother and more consistent power output while 2-strokes deliver the maximum output within a specific range. This means riders of 2-stroke bikes have to control the clutch and throttle to keep the bike within the desired RPM range. 4-stroke bikes are more predictable and easily convert into torque while 2-stroke dirt bikes produce more lively and faster power output.

Most modern 2-stroke and 4-stroke engines are liquid-cooled, which means that the cooling system involves surrounding the cylinder walls with radiators, hoses, and cavities to help dissipate the heat that is produced by the engine.

2-strokes are able to idle at lower RPM ranges which means they can generally run cooler at lower speeds. 4-strokes tend to run hotter when riding at lower speeds in slower more technical terrain. 4 strokes could overheat easily when idling or putting around at low speed.

2-stroke engines have a simpler design and have far less moving parts than a 4-stroke engine. This means that if the motor were to experience a mechanical failure, a 4-stroke will most likely have more parts that need to be replaced, which means 4-stroke engine repairs will be more expensive.

This is not true for all parts of the engine. Mechanics generally report that 2-stroke pistons are more likely to fail and require replacing more frequently than 4-stroke pistons. Read our recommended replacement dirt bike pistons guide.

There are a few differences to note when it comes to engine maintenance. Unless the bike is oil injected or has TPI (transfer port injection) 2-strokes require pre-mixed fuel. The TPI essentially removes the need for premixing fuel and jetting carburetors.

If there is a motor failure, 4-strokes generally require more parts to be repaired. At the end of the day. Both types of dirt bikes will require a similar level of maintenance.

Engine braking can provide a substantial amount of help while riding, especially on steep downhills and slowing down faster into corners. Engine braking is considered a big bonus when it comes to dirt bike racing, but can often take a bit of getting used to for casual riding.

2-stroke motors will generally start up much faster and require much less energy and effort to fire up. The heavier 4-stroke engine requires much more strength to kick start. Most modern dirt bikes are equipped with electric starters which solves this issue.

In my opinion, It’s always best to have both a kickstart and an electric start, but many modern bikes have completely removed the kick starter. This is largely due to the reliability of the electric start function which has improved so significantly that kickstarters are becoming obsolete. If it were up to me, I’d still opt to have both.

Before buying a dirt bike, take into consideration how many times you might find yourself having to stop and start the bike – especially if the bike you intend on buying does not feature an electric start. If you plan to buy new, regardless of 2T or 4T make sure you break in the engine correctly as this will help with all ound engine performance.

4-stroke motors deliver more continuous and gradual power which means that they generally offer more traction with the ground. Since the power delivery is much more consistent, there will be less spinning of the rear wheel which plays a big role in the amount of traction your tire will have with the floor beneath it. On a 2-stroke bike, clutch control and changing gears become much more important to ensure consistent power output and constant traction.

Clutch control and throttle control is at the epicenter of riding skill. As your engine reaches the peak level of power on the RPM range, you’re able to control the RPM’s to keep your engine running within the optimal RPM range. 4-strokes have a much wider RPM range which makes them much easier to control and maintain traction with the surface while requiring less play with the clutch and throttle.

Since 2-strokes climb the RPM’s much faster as they reach the somewhat unpredictable powerband, the optimal RPM range is much narrower. This means that as a rider, you’ll need to be able to control the RPM’s with your clutch and throttle to deliver the desired level of power and traction.

Most modern 2-strokes are carbureted engines while all 4-strokes are fuel injected. A carburetor will make use of varying jet sizes to ensure the level of air entering the motor is set at the optimal level.

Fuel injectors make use of electronic computers to deliver the optimal air-fuel ratio. They do this through the use of internal sensors that are able to calculate and compensate for differing levels of air temperature and air pressure.

A bike that is fuel injected doesn’t need to be manually tuned like a 2-stroke carburetor. This means 4-strokes and fuel-injected 2-strokes are much simpler when it comes to finding the right ratios.

A 2-stroke bike will displace most of the vibration coming from the ground and engine throughout the frame of the bike. As a rider, you’ll notice a difference in the amount of vibration coming through the footpegs and handlebars. If your body is not used to the vibrations, this can very quickly lead to fatigue and arm pump.

4-strokes are much better at keeping the vibrational energy within the motor, minimizing the amount of vibration that runs through the frame of the bike and the bars.

The sound difference between a 4-stroke and 2-stroke is highly distinctive. 4-strokes produce a much deeper growling sound and are usually louder than a 2-stroke on the decibel scale.

2-strokes produce a much higher-pitched noise, although the sound doesn’t carry quite as far. The sound of either bike is influenced by the type of exhaust it’s fitted with. Aftermarket exhausts will make a difference in the noise each bike makes, as well as the power delivery. A poorly managed exhaust will also completely change the sound of your bike. Check out our guide to some of the best 4-stroke dirt bike exhausts.

When it comes to 2-strokes, European manufacturers like KTM, Sherco, Beta, Gas Gas, and Husqvarna have continuously developed both the 2-stroke and 4-stroke range. Always remember that 2-strokes generally offer less variety across all manufacturers.

2 Stroke Vs 4 Stroke For Motocross Racing

2-strokes are generally less common in motocross and supercross racing where 4-strokes have the advantage of consistent power delivery and higher horsepower.

When it comes to hard enduro and trail riding, 2-strokes are far more popular given their maneuverability and responsiveness to clutch and throttle control. This responsiveness enables riders to get over and around obstacles with the blip of a finger. Check our our guide to the best 4 stroke dirt bikes for trail riding.

2 Stroke Vs 4 Stroke For Beginners

Since a four-stroke engine fires after every two crankshaft revolutions, the power delivery is much more gradual and predictable than a two-stroke. The smoother power delivery makes a four-stroke dirt bike the best option for beginner riders to learn on. Here’s a detailed guide to choosing the right dirt bike when starting.

I love enduro-style riding –  forest trails, rocky mountain climbs, and technical riverbeds. I ride a KTM 300 exc (2 Stroke) and I wouldn’t have it any other way. The 2 stroke gives me the fast acceleration I need to brraap up and over rocks, through the twisty trails, and over any fallen logs. I must admit, there are a few guys in our riding group who are able to do all of these things just as good (if not better) than I can on their four strokes. I guess it all comes down to rider skill, preference, and the terrain you ride in.